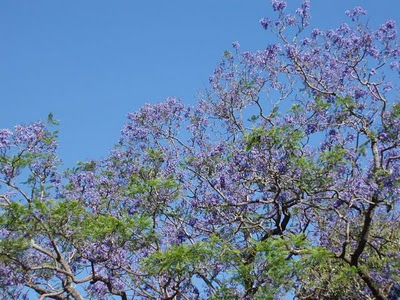 It is Jacaranda time in Fibrotown. The town is dotted with delicious swathes of blue-purple flowers, tarting up its streets with all the assurance of a touch of blue eyeshadow on an ABBA covers band. I love Jacaranda trees: huge and stringy when covered in green; beguiling when in flower. They remind me a little of Meryl Streep’s portrayal of Julia Child in Julia & Julia – still a little awkward when all decked out in their finery but charismatic nonetheless.

Mr3 is entranced by them. He calls them the ‘Boy Trees’, liking that his team gets such a spectacular showing. He, much more than Mr6, is very aware of the ‘pink is for girls, blue is for boys’ rule. I think this is just because he has an older brother, as The Builder and I have never been known to spout that rule. Mr6 was never as fixed in his thoughts at three. Though his teddy bear, Bronte, a definite girl, has always had pink as her favourite colour, while his has always been green.

When I was growing up in Fibrotown (we moved here when I was in fifth grade), we had a massive Jacaranda out the front of our house. It was one of many on our street, creating an avenue effect to lead people out of the town centre and up towards the local showground. In November, our street looked beautiful. Right up until the Jacaranda trees began to interfere with the electricity lines and ended up trimmed into that bizarre reverse mohawk that this seems to entail.

Our Jacaranda survived a lot of years. Its huge roots spread and pushed up the pavement right from our driveway down to the next door’s fence. The little ridges created quite an obstacle course for those of us roller-skating down the hill. In December, as the flowers began to fall, our front path became an exercise in risk management as hundreds of flowers formed a beautiful blue-purple carpet across our front lawn. A beautiful, slippery carpet. Add in a dash of summer thunderstorm and a pair of thongs and you pretty much had to skate across the top at break-neck speed, seeking the safety of the gate.

Some years ago, the council cut down our Jacaranda. Termites. They replaced it with a strippy little sapling that sat there for a long time, doing nothing, going nowhere, lucky to survive the attention of bored teenagers wandering the streets on Friday and Saturday night.

Today, I parked my car in the shade of that little tree to visit my Dad (Mum is still in hospital, but doing well – thanks everyone for your good wishes). It’s still only about a quarter of the size of the old one, but it’s getting there. The flowers are appearing, only this time, they’re dropping on the footpath, which is as far as the spread reaches so far.

Here’s hoping my boys have fond memories of that tree in years to come.

PS: I’m flogging my blog with Lori at RRSAHM this fine Friday. Why not pop over and discover some fab new blogs?