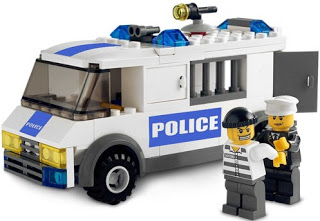 Another day, another preschool excursion. Following on from our marathon trip to the art gallery last term, today Mr3 and I attended the local police station. He was there to see a police motorbike. I was there to see him.

You would think I might have learned from our last adventure together. But no. He looked at me with his big blue eyes and his most endearing expression (I admit, he does endearing very well) and said, ‘You are coming with me, aren’t you mama?’. Is there a person in the world who could say no to that? Not in the Fibro there isn’t.

Also, the art gallery trip wasn’t the total wash I’d expected. Despite my worst fears that I’d lost four hours of my life to an experience that he would forget within five minutes, there has been arty progress. Within weeks, he’d decided he wanted an ‘art gallery’ in his bedroom, and so an array of his works was artfully blue-tacked to the wall, alongside some special commissions by Mr6. “I can’t draw fire engines yet,” Mr3 reported. “So my brother is going to do them for me.”

He takes great pride in calling Mr6 his ‘bruvver’, and even greater pride in the triptych of ‘Fire Engines in Red and Blue’ that Mr6 created.

But I digress. Today was about sirens of a different kind. Once again there were 20 preschoolers and a long, arduous walk involved. This time, we had perky Officer Gina to escort us. The boys were all very admiring of her belt, with its gun/radio/handcuffs accessories.

We all Stopped, Looked and Listened at every corner, practising our road safety. We got two blocks into the walk before both my little charges – Mr3 and his friend The King – started wondering if they could just stop thanks. By the time we got there, nobody was ready to look or listen. They just wanted to lie down in the shade.

But there was business to be done. We checked out a couple of offices, watching policemen in uniform complete paper work and looking like they’d much rather be elsewhere. We saw the safe where the guns go at night – but not the actual guns. We couldn’t see the jail, because, as Officer Gina explained, there was a baddie in there. I’ll be calling Officer Gina tonight at 2am when Mr3 wakes up with a ‘scary dream’.

The highlight of the visit, apart from a showbag full of stickers, tattoos and a colouring book, was an inspection of a police car, complete with flashing lights and very loud siren. Mr3 would not get in. He was still looking for the motorbike.

We walked back the six blocks in the hot sun (the only hot sun we’ve seen for a week, I might add). Actually, I walked back carrying Mr3, who insisted there was something in his shoe, despite several checks that proved the only thing in there was his foot. When I left him to go to work, he was lying on the rug, shoes off, under a fan, with a damp cloth on his face. Do we call that a successful outing?

Tonight as I tucked him in, he suddenly threw his little arms around my neck. “Thanks for sharing my scursion,” he said, with a sigh and that endearing expression.

It was my pleasure.