All hail the Sultan 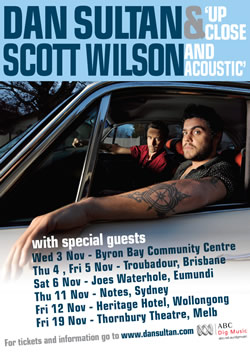 On Friday night, The Builder and I dropped our kids off with Gran and Pops for a sleepover, picked up our friend S, filled the tank with petrol and headed north. While it sounds a bit Thelma and Louise (with The Builder playing the Brad Pitt role), it wasn’t as dramatic as all that. We were off to a gig. To see the newly crowned ARIA Best Male Artist. Dan Sultan to be precise.

When we booked our tickets weeks ago, after humming and ha-ing about driving an hour up the highway for a gig, he was not ARIA Best Male Artist. Though he was the winner of the Deadly Award for Single of the Year (‘Letter’). We had also seen him in a stellar line-up of indigenous artists who supported Al Green when he performed in The Domain last year. The Builder had heard good things. We were going.

The venue was The Heritage Hotel, Bulli. We entered through the public bar, which is never the most auspicious of beginnings at an Australian pub. But the room in which the gig was to be held was worth the price of admission. High pressed-metal ceilings, broad, weathered floor boards. Proportions. You know what I mean?

Propping ourselves up on a bar stool, we sat back to wait for Dan. Watching the crowd, as it ebbed and flowed around us. Meeting people as they stretched over us to pour a glass of water. All of us waiting, expectant.

He didn’t disappoint. Playing with his mate (and musical collaborator) Scott Wilson, he chatted and strummed his acoustic guitar and sang. Good grief, the man can sing. There was a bit of banter about how they’d found themselves in INXS for five minutes at the ARIAs, and a lot of discussion about how they’d found each other in a pub in Williamstown.

Meanwhile, back in the crowd, S was distracted by a couple in front of us. “Oh my God, they’re practising Tantra,” she said, shoving me in the back and almost off my stool.

“Are you serious?” I said, leaning forward for a better look. I’m not sure what I was expecting – something from the Kama Sutra, perhaps? – but the guy massaging his girlfriend’s neck while she zoned out on the sofa was not it.

“That’s it,” she said, pointing at them in an obvious fashion. “See where his fingers are? Pressure points.”

I watched more closely. The girlfriend did appear to be in a blissful state, but could this not simply be the joy of loving fingers on aching, computer-strained muscles. “Can’t see it,” I said.

We left it at that, eyes and ears drawn back to the stage by the voice of the Sultan. Me with a host of questions as to why my friend S knows so much about this…

The gig was all over by 11pm. One last strum of the guitar, a quick high-five through the crowd, and Dan Sultan was out the door and roaring off into the night. Soon, we were doing the same. Only without the ringing applause of the enthusiastic crowd fading in our ears.

Back down the highway. Home.