The drama of reading at school

Today was Reading day at the school. I’m a regular. I’ve been rolling in for an hour or two from the start of kindy, when I was working through ‘I can walk/I can run/I can read’ style texts with kids who couldn’t keep their eyes on the page for more than 15 seconds at a time.

In those days, Reading was known as ‘AKA Torture’. Now, it’s kind of fun. I am genuinely astounded at the progress.

How do kids learn to read? Even having watched Mr6 do it has not explained the magic.

I’ve been allocated Group Reading this term. I was offered training, but, after some discussion, the teacher and I agreed that I was probably up to the task.

Mind you, it is no easy ride.

Keeping six almost-seven year olds focussed on a book takes some wrangling. Occasionally, I even need to get out the voice that my sisters have dubbed the ‘Mean Aunty Al’ voice. I prefer to call it ‘Cool, Mean Aunty Al’ but they insist my nieces and nephews are not buying into the Cool at this stage.

Today, two of my little groups did some work on the three-page plays they are going to present to the class.  They have read them through a few times and are at the stage of having to act them out.

Mr6’s teacher suggested I ‘have them think about the kinds of actions they might need for their characters’.

I had visions of Robert De Niro working through the motivations of Third Billy Goat Gruff. That vision kept me amused for quite some time.

Anyhoo, it was interesting to see the different approaches of the two groups. Group one – Mr6’s group – have all chosen one character each to play and have stuck to that. Their reading is coming along nicely, but they were adamant they did not want to read it through a second time ‘with actions’.

They’ll stick to the reading, thanks.

Mr6, who is the Big Bad Wolf in the truncated version of The Three Little Pigs (which features, disconcertingly, email), has been wandering around the house repeating what he thinks is his funniest line for a couple of weeks.

It goes something like this: “I’ll be huffing. There might be some puffing. And there’s a pretty good chance that  your house will fall down.”

He is tickled pink with this.

Group two has a much more improvisational approach to their play (The Silly Billy Goats). There was a small all-in brawl before we began about who would take which part. The boy who ended up Second Billy Goat was desperate to play Mysterious Creature, but the group would not have it. He sulked through his part.

This group was thrilled to have a chance to act it out and helped me to construct a ‘bridge’ out of our reading mats. The Mysterious Creature wedged himself under the bag rack, so as to be more mysterious. They made every effort to out-Billy Goat each other when tripping across the bridge.

It was all very hilarious. So much so, that the teacher from the class next door came outside to tell us, in a Very Serious Teacher Voice, to keep it down.

I realised at that point that I am an amateur. I went home to work on my Mean Aunty Al voice. There’ll be huffing… There might be some puffing… But there’s a pretty good chance that it will be Cool. 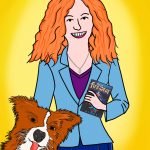