Keeping the band together 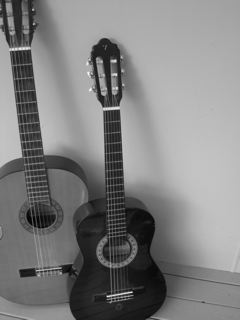 After two weeks’ holidays, Mr6 and I are back at guitar lessons. We have scaled the lofty heights of Book 2 of our course, as far as ‘I’m a Little Teapot’ and ‘Michael Finnigan’ (begin again). We are also working on the theme from Inspector Gadget (you’re welcome for the ear worm).

Despite my best efforts, Mr6 would not practise over the holidays. He noodled about with a few chords, making up a song or two, but he would not play notes, and definitely not in any recognisable order. I, on the other hand, put in two or three good sessions with Michael, The Teapot and the good Inspector.

I discussed tactics with my Mum. I remember being a kid and being, um, encouraged to practise the piano or organ or recorder or whatever the instrument du jour was. It didn’t work. But setting an example wasn’t working either. She pointed out that he’s only six and it’s more important that he be introduced to the instrument than that he be committed to it. Dating rather than marriage, so to speak. So I didn’t nag. Besides, on other occasions when he’s refused to practise, he’s rolled up to our lesson and, in the face of my dire predictions, pulled out a reasonably good effort.

Not this time. For starters, he insisted on wearing full piratical garb and attempted to play in his eye patch. That lasted all of three minutes. He couldn’t remember what the notes were, let alone where they were. (Being unable to see them with one eye, didn’t help.) I didn’t say anything. Just played through my pieces and then sat there quietly while he struggled through his. The Inspector Gadget theme, in particular, seemed to take days.

When he’d finally played the last note, our teacher, the lovely B, laughed at him (as only a gorgeous 17 year old could get away with) and said, “See what happens when you don’t practice? It’s just hard work.”

After we’d zipped our guitars back into their cases (we’re very rock star) and were walking back to the car, he turned to me. “I think we’d better schedule in some practice this week,” he said.

I was relieved. It could have gone the other way, with a refusal to ever return. I’m not ready to go solo just yet.

Do your kids play instruments? How do you deal with the practice problem?