It’s a pirate’s life for me (apparently) 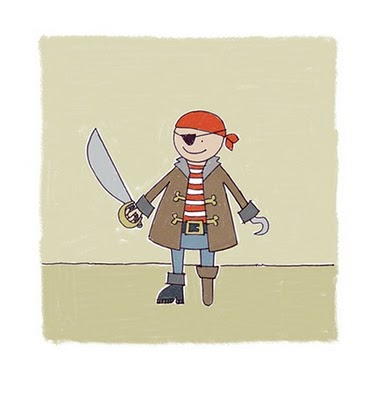 Last time I visited my sister Maxabella, we found ourselves at a loose end and, consequently, delved deep into the contents of her TiVo. Somewhere near the bottom was an episode of Wife Swap USA, in which a professional organiser type with professionally organised husband and professionally organised children (seriously, I think they all went to sleep in individual, clearly labeled tubs each night) swapped with a woman whose family had chosen to live Piratically. In essence, like pirates. (cue: Arrrrrr!)

I was reminded of that one particular hour of my life (which I will never get back) today as both my boys ran around the house wearing piratical garb and speaking piratically. There was even some cutlass waving, which was quickly cut short when Mr3 attempted to trim Mr6’s nose hairs with said weapon. Again, the inspiration for this afternoon of mayhem was Maxabella. On Saturday, we will attend the Mermaid/Pirates party of my niece Cappers. Mr3 is beyond excited. He has been talking about his outfit for weeks.
It was agreed that pirates need three things: an eye patch, a hat (artistically tied bandanna also suitable), a sword. I tried to fob him off with a Captain Feathersword feathersword, but he scoffed (piratically) at the idea. Only babies have featherswords, apparently.
After an excursion to Spotlight today, he is the proud possessor of a skull-and-crossbones headscarf arrangement, an eye patch the size of his head and a cutlass that will need to be kept in a high cupboard as soon as the piratical party is over. Possibly before. He has chosen the four piratical tattoos that will adorn his body. He prefaces every sentence with ‘Arrrrrr Me Hearties’. And he takes to the high seas in the washing basket at the slightest provocation.
I have begun calling him The Dread Pirate Mr3, which he loves, despite not having the faintest idea what I’m talking about. I’m wondering if we have time for a viewing of The Princess Bride, one of my all-time favourite movies, before we set sail for the party. But perhaps not. I’m not sure I could cope with listening to Mr6 parrot ‘Hello. My name is Inigo Montoya, you killed my father, prepare to die’ for the next week.*
Speaking of which, Mr6 has one special request for his pirate costume. A parrot for his shoulder. Spotlight was all out of those.
It’s times like this I wish I’d been blessed with the craft gene. Arrrrr.
*If this paragraph makes no sense whatsoever, I thoroughly recommend a viewing of the movie.
{image: carolyndraws/etsy}