How to write a book with someone else 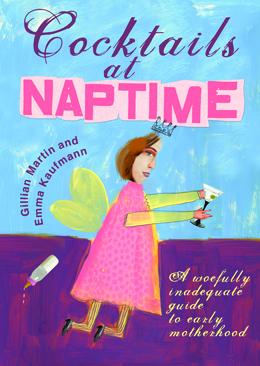 When Gillian Martin got in touch to ask if I’d be part of the blog tour for the cute, funny book – Cocktails at Naptime (Finch) – that she’d co-authored with Emma Kaufmann, I thought they’d knocked on the wrong door. After all, it’s been nearly four years since there was a newborn in this house and that’s unlikely to change in the foreseeable future. Okay, ever.

But then I investigated a bit more (as I do) and discovered that there was more to the story than met the eye. Specifically, that Gillan and Emma had written the book together, despite the fact that they were based on different continents. Moreover, they had never met.

Confession time: I have co-written a (not yet accepted for publication) romance novel with a friend. She lives in another state. It was a fabulous and enlightening experience for me because she is a) a published writer, b) organised and c) a plotter.

I, on the other hand, am unpublished in fiction, fairly chaotic in my approach and what’s known as a ‘pantser’ – someone who writes by the seat of her pants with no plot outline and no clear idea of what will happen next. I do not advocate this approach. Having worked with my friend, I can see the many benefits of actually knowing that your story will, at some point, end. I just haven’t worked out how to do that on my own yet.

But I digress. The point is that my friend and I know each other. We have a fair idea of each others’ personalities, working styles, taste in cocktails. And still it was a challenge writing together. How do you go about it when you don’t know each other from a bar of soap? Of course, I had to ask. So I emailed through some questions, and voila! The first Q&A on Life In A Pink Fibro.


If you’ve never met, how did you decide to write a book together?

Emma: “In the early days we just used to hang around each others blogs and we were blog pals but we’d never emailed each other. Then, in autumn of 2009 I was thinking of writing a funny parenting book and wrote to Gillian asking her to help me with firming up a concept. She said she was tired of reading insipid books written by mums who lived their lives through their kids. ‘It’s about time a real mother with an actual life outside her kids got a shot at writing a book,’ she said and before long we knew we were kindred spirits and that we had to write this book together.”
Gillian: “I’m so glad Emma wrote me that email. I needed someone to schmooze me!”


How did you divvy up the writing?

E&G: “We thought up the outline and then divvied up the sections as fairly as we could, and then, via email, we sent stuff back. Then we’d re-read each other’s stuff and edit it to make it funnier and sharper. But once we got going we both added bits to every part.”


How long did it take?

E: “It was taken on by Finch when it was only partially finished. But the initial writing took about a year.”
G: “Emma’s comment about it being partially finished made me laugh. We sent off our finished manuscript too early, I think, because we were excited. We were lucky that Finch saw the potential in it because it really wasn’ t finished at all! We had a great editor, Sam, who went through it all and told
us very bluntly what was great and what needed attention. And we pretty much rewrote it all – a few times, in fact. One day I’ll go back and look at the manuscript we sent out and compare it with the book before you. Maybe when I’ m in a nursing home and have spare time.”


Who was the ‘whip cracker’ in the relationship?

G: “I am really organised. I do flowcharts and stuff. Emma is more of a hippy chick as in ‘it’ ll be alright, man’. Okay, she didn’t really ever say that. Really no whips never ever to be cracked. We both work very differently but, man, we both worked hard.”


How did you make different writing approaches work?

G: “We had a tight structure from the beginning and we pretty much stuck to it. We had to. I don’t think it would have worked otherwise.”


What do you think having babies and writing books have in common?
E: “Creating a book is a lot like giving birth. You go into it with a carefully thought out birth plan. Then during the actual birth (writing of the book) there is a lot of chaos, there are lots of stops and starts, there are frustrations, there is some screaming, and finally you birth a baby or book and feel a great sense of achievement!”
G: “Having a baby is a lot quicker, I’ll tell you that. All in all the process from that first email from Emma to getting my hands on a copy of the book is nearly three years. I think elephants gestate in a shorter time. There are also a lot of disappointments along the way. People thinking about sending a book out to publishers should know this. You get rejected many times. Worse; you get false hope when someone says they are interested and then change their minds. Having a baby is a lot easier to handle.”