What brightens the most ‘meh’ day? 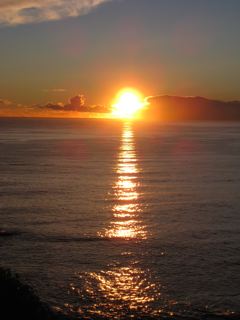 Today was one of those days when I wished I was somewhere else. Specifically, the front verandah of the little bungalow at Merimbula Beach Holiday Park in which we spent three days of our holidays. Views straight to the horizon. Big, full moon reflecting on the water. Stars strewn like fairy lights across the sky. Sunrise emerging from the waves.

Instead, I was in the Fibro suffering a holiday hangover. The first week back, I think everyone is carried along by a feeling of wellbeing and powered by holiday smiles. A week later – specifically, the next Monday later – that’s all gone and it’s as flat as the Dutch landscape around here.

Mr3 never wants to return to preschool. Asked why, he says there’s simply not enough to do. Like he’s working on simultaneous world-saving projects at home.

Mr6 is tired. Tired enough to go to bed without a fight, and only one chapter of Captain Underpants (which we will discuss on another, much funnier day).

The Builder and I spent the evening folding clothes. To liven things up, we made up a new game. It involved sock puppetry and matching pairs. The good news is that we now have only five odd socks wandering unloved around the laundry. The bad news is that this activity was about as exciting as it sounds.

I did, however, unearth one of the books I swapped on holidays. One of the best things about holidays is the reading time that becomes available when you’re not connected to the phone, internet or TV guide. This can be problematic, however, when you read like I read – that is to say in large, hungry gulps without pause for air. You need an awful lot of fodder to feed that sort of addiction. Which is why I like staying in places with libraries – particularly the ones where you can simply take a book, as long as you put another on the shelf in its place.

I finished The Fountainhead, a cracking read by Ayn Rand, and replaced that with a second-hand purchase of a James Patterson co-authored crime novel (for which I was glad I’d paid only $3). That was left on the shelf at our next stop, happily replaced by a Donna Leon Inspector Brunetti novel. The one I discovered tonight. The one I haven’t finished reading. The one I’m heading off to read right now.