There’s no place like home (even for a pirate) 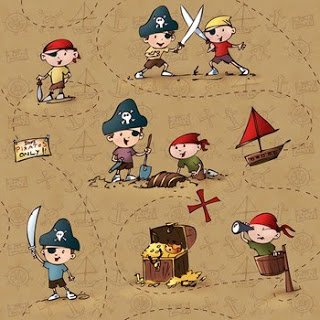 Mr3 went to preschool in pirate regalia today. Striped shirt with skull-and-crossbones. Bandanna around his head. I drew the line at the sword and he lamented long and loud that he couldn’t be a real pirate because he had no parrot on his shoulder, but we got there in the end. He arrived with a hearty ‘shiver me timbers’ to much admiration.

It was a far cry from the sad scrap of misery that greeted me when he awoke this morning.

You’re going (albeit with a surreptitious feel of the forehead in case he really was sick).

It wasn’t until we got out the front of the preschool that he admitted he was worried. One of the bigger boys in his class was being ‘mean’. My heart sank. My poor little pirate. The idea of him battling along alone made me feel sick. Three is really very small.

I’m worried that if she can’t help him with his behaviour my pirate won’t be very hearty about returning to preschool next week either. All I can do is focus on helping Mr3 with his responses and reactions. He was happy enough when I picked him up, though sans bandanna as he’d ‘got hot’.