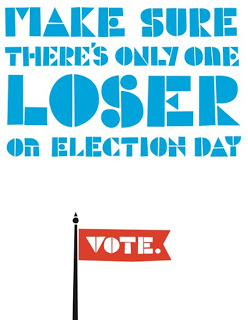 With only four days to go until the election, both major parties are really slamming home their messages through relentless advertising. I can’t help but wonder just how effective this actually is. Everywhere I go, on the street or online, people are bemoaning the savagery of the attack. The ads are negative, they are dull, and they are incessant.
So is the message getting across?
Tonight, Mr3 demanded his own book to write in. He sat down at his little red table with a great deal of pomp and ceremony (last night’s cough having magically disappeared after a ‘day off’ preschool), pulled out his Bic ballpoint and began scribbling away. Mr6, not to be upstaged, joined him and there was soon a fury of sighing and writing, scrawling and scratching, such as I’d not seen since last weekend’s romance writer’s conference.
I turned my back and heard a pen roll off the table, hitting the floor with a clatter.
“Julia Gillard!” said Mr3, in much the same tone of voice as the rest of us would use to swear.
The Builder and I looked at each other, eyebrows dancing frantically as we attempted to hide our laughter.
“What did you say?” I asked Mr3.
“Julia Gillard!” he replied, in exactly the same tone of voice.
“Who’s Julia Gillard?” asked The Builder, through suppressed laughter.
“Our new prime minister,” Mr3 answered, matter of fact, and continued penning his ‘words’.
Where did it come from, that tone of voice? All I can think is that the Coalition has been secretly screening subliminal ads during Yo Gabba Gabba.

I may be drawing a long bow here, but I’d like to take this opportunity to remind you to vote in the Kidspot Top 50 Bloggers. Just a quick click through using the button on my sidebar and I’ll be one vote closer to Dunk Island.