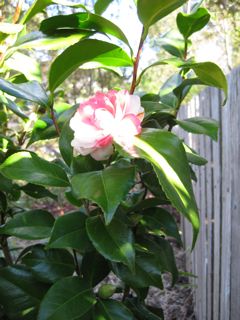 Just as every family has a Black Sheep, so every garden has a Problem Child. That plant that refuses to do its thing, whether that be fruit or flower. We haven’t had too many here at the Fibro, having inherited someone else’s garden. In the Big Smoke, we had to create a garden out of a patch of winter grass, a clump of bamboo and a family of Agave pups. Here, we moved in to a garden with a number of established trees and shrubs, most of which work brilliantly, giving us colour and flowers all year round.

Except for one, a shrubby little camellia with a tight, closed expression.

When we arrived in December 2008, I didn’t think much of it. After all, twas the season to be jolly, not the season for camellias. So I gave it a ‘you could be bigger’ once-over and moved on to revelling in the roses, which were blooming at the time.

It caught my eye six months later, when I noticed it was more or less the same size as when we’d arrived. Given that it’s situated along the Western fence, with full access to glorious morning sunshine all year round, this just didn’t seem right. And so a frenzy of feeding, watering and mulching began. That should do it, I thought, dusting off my hands and fully expecting a bonanza of blooms come mid-winter.

Nothing. Nada. Zip. Lots of little buds of promise that just failed to deliver. I still had no idea what colour the flowers even were! I was unaccountably disappointed. I also had a Project.

And so, over the summer, I fed and watered regularly, mulched religiously, weeded fervently. I popped out to give it little pep talks. I used a machete to ward off the ever-marching, ever-encroaching South African Daisies.

I allowed myself to hope.

A couple of months ago, I played my trump card, dousing the poor unsuspecting plant in a deluge of compost (I finally had enough – for one plant). And then I waited.

I waited while the salvia sprang to purple beauty – and died back. While the camellia in the backyard, neglected and forlorn, produced a dazzling display of hot pink, saucer-sized flowers. While the camellia hedge across the road grew so heavy under the weight of its red blossoms that it threatened to topple over.

Meanwhile, along the Western fence, nothing. Buds of promise bursting out all over – but we’d been there before and I wasn’t going to get excited.

And then, yesterday, not just one bloom, but two. Waxy. Striped pink-and-white. Awe-inspiring in their unfurling perfection.

I was so excited I actually gave a squeal of joy, calling The Builder out for inspection. We cheered. We took photos (see above).

We are so easily pleased.

Now that I fully expect my little shrub to produce the full complement of camellias, it’s time to turn my eye to other projects. Specifically, the Japanese Maple, which seems to be so indignant at finding itself in Fibrotown that it’s refusing to grow. Envision a small tree with its branches on its hips, and you get the picture.

It’s in for a good talking to, that maple.