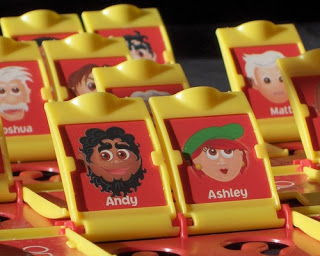 Overall, it hasn’t been the best of days. Marion was eliminated from MasterChef sparking outrage across the nation (or on my sofa anyway). I started the day at the doctor being checked out for a possible blood clot on my lung*. I’ve been short of breath and short of temper, which turned me into the Unfunnest Mum Ever.

But even on days like today, family provides the antidote.

You may have noticed that The Builder and I are in the habit of having ‘little chats’ with our boys about various things (the eating problem for one). Sometimes I worry that we are too serious, but then, I figure, you’ve got to go with what you know and the boys will have more than enough information on, well, everything to make good decisions in later life (you’re allowed to say ‘joist’ here).

So yesterday we found ourselves talking to Mr6 about the importance of being a Good Winner. We’ve already done the Good Loser lecture and, to his credit, he generally takes a loss at Connect 4 or Chess on the chin. But when it comes to wins…

He and The Builder had completed a game of ‘kicks’ and he’d won, reaching 10 before his dad. He came into tell me about it, announcing that he was The Best Kicker In The World, and going on and on about how easy it all was.

So we had The Chat. About the importance of modesty in victory. And how if you don’t make the people you beat feel too bad about themselves they’ll be happy to play again. Blah, blah, blah.

Fast forward to today. I’ve been to the doctor and gone to Mum and Dad’s to collect the boys. I’m a bit anxious about test results, but relieved that I’m doing something about how I’m feeling. When I arrive, Mr6 and his Gran are locked in an intense battle over the Trouble board. I keep walking through to the kitchen, where Dad and I discuss the State of Origin (boo hiss), Parramatta’s potential new coach (boo hiss), and Julia Gillard’s East Timor solution, which prompts some desultory debate.

Our peace is shattered moments later by a voice from the dining room breaking into a loud, raucous version of Queen’s ‘We are The Champions’.

I pop my head in the door. My mother is waving her arms around like a Brazilian soccer player, crowing and singing. Mr6 is looking bewildered.

“HA!” she says. Seriously, if her hip wasn’t a bit stiff these days she’d be dancing around the room.

I can’t help but laugh. “I spent several minutes last night explaining to Mr6 the importance of being a good winner,” I splutter. “Modest, self-effacing, you know.”

She stops. “Where’s the fun in that?” She breaks back into song.

Mr6 took the message on board. When he beat her a couple of times at Connect 4, he was quietly pleased, even though he lost the series. But when he whipped her at Guess Who, he was announcing himself The Best Guess Who Player In The World.

Sometimes you’ve got to celebrate the wins.