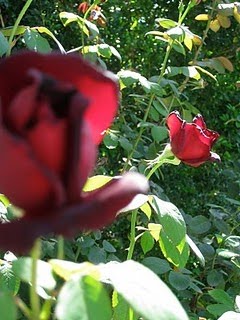 Every once in a while, it’s good to do something that reminds you that you’re not as smart as you think you are. Today, I did three.

On the surface, none of these things was particularly difficult. In fact, there are many who would be a CWA Lady to my MasterChef contestant when it comes to these challenges (for those who missed it, the lemon-thyme-with-ginger-mousse-encrusted smarty pants contestants on the current series were brought crashing down to earth last week when asked to produce scones, a fruitcake, lamingtons, a neopolitan cake, and some jam – basic cookery that looks like rocket science when you don’t know how).

My challenges were thus:

*to prune our roses;

*to help The Builder figure out how to get a light disseminator into our new skylight;

*to produce a roast dinner.

Let’s start with the first one. When we bought The Fibro, it came complete with an established garden, including a simply spectacular rose bush. (That’s it flowering in the picture above, and I’ve waxed lyrical about it before.) With such a rose bush comes the responsibility each year of the Dreaded Pruning. Everyone knows roses need pruning. Not everyone, including me, knows how to do it.

Last year, The Builder took charge and gave the bush a serious haircut. Then we waited. It wasn’t until it burst into abundant life in spring and glorious bloom in summer that he admitted how worried he’d been that he might have got it all wrong and killed off a plant that must be at least 20 years old.

This year, clearly not wanting to carry the stress, the secateurs (and pruning saw) were ceremoniously handed over to me. And so I found myself out the front, in the fading winter sunshine, trying hard to remember the instructions from the last Better Homes & Gardens snippet on pruning.

It took me ages. Anyone watching me would have thought I was either communing with the plant or losing my senses. I thought long and hard before every snip – was it dead wood? Would it be a crossed branch? Was there a healthy bud nearby? Could I be any more of an idiot if I tried?

The job is done. All I can do now is wait.

Challenge number two was a spatial issue. I should never have got involved. There was no diagram. It was a matter of working out which way the screw/clamp arrangement needed to go to hold the disseminator thingy in.

It should be pointed out here that spatial issues are not my forte. I have had a new car for over a month now, since the World’s Most Boring Car when to the great retirees motorshow in the sky, and I only reverse parked it for the first time on Friday night. And only under duress. And only in a space big enough to fit an articulated semi-trailer. I’m no good with ‘which peg goes in which hole?’ questions.

The Builder and I discussed it for several minutes with me making several unhelpful suggestions about turning the whole thing upside down before I decided that it might be better if I went to rearrange my sock drawer. Or something.

Challenge three was the lamb roast. It should be pointed out here that my cooking is much better than my reverse parking. I can even make scones that do not bounce on the table. But roast dinners make me uncomfortable. If it were just about baked potatoes and gravy, I’d be a winner. But I’m hit and miss on getting the meat right.

It worries me, it really does. Everyone talks about their mum’s roast dinner. Half the population only goes home after the age of 18 for The Roast. If I can’t get that right, the boys may race out the door the minute they can and never come back.

Tonight’s effort wasn’t too bad. But definitely not as good as my Mum and Dad’s.

I think I’ll invite myself over this week for dinner. Or a cooking lesson.