It’s never too early for a foot in the door 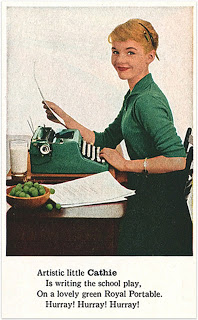 Do you remember Work Experience? It all came flooding back to me when I read this post by the very talented Deer Baby (go look, you’ll love it – her name is Alison, how could you not love it?). The girl who wrote ‘Help, I’m being held prisoner’ inside the flap of the envelopes was truly inspirational. I wish I’d thought of that.

It wasn’t the starts (though I’m never at my best at that ungodly hour – ask my children). Rather it was the fact that day one saw me held captive ensconced in the office of the Letters Editor, reading page after page of semi-literate abuse. My second day saw me on the front steps of a suburban house in a suburban street, shadowing a ‘stick-one-foot-in-the-door’ reporter as he asked the family inside for pictures of two children who’d died hours before when a bomb went off in an airport overseas. Day three involved eight hours of excitement spotting spelling mistakes at the subs’ desk. Days four and five pass in the kind of blur that only victims of shell shock will understand.

Quite the introduction to journalism.

I went home and told my parents I’d decided to become a secretary.

In fact, I was lucky. Not that it felt that way at the time. But by the time I came into contact with work experience again – 10 years later, and this time as the experiencee, rather than the experiencer – I came to understand what a valuable program that paper had in place. I was given a very clear picture of each facet of working on a newspaper – whether I liked it or not.

In Magazine Land, work experience tended to involve waiting around the foyer, wearing your best ‘fashion ensemble’, waiting for someone to send you for a coffee. If you were lucky, you were chosen to package clothes up for return. Occasionally, someone would talk you through a story and possibly get you to write up a product review. On the plus side, you’d always be sent home with a beauty ‘goody’ bag, so it wasn’t all bad.

It’s not that we didn’t care about our ‘workies’, just that, by then, magazines were already running on shoe strings, everyone was doing the work of two people and nobody had time to explain anything. Except how they liked their coffee.

It didn’t seem to deter the ones who really wanted to ‘get into mags’. You’d see their faces again a few years later, working as interns (read: for free) in the fashion cupboard, doing whatever it took to be in the right place at the right time when a job opening came up.

Now that’s what I call a ‘foot in the door’ approach.