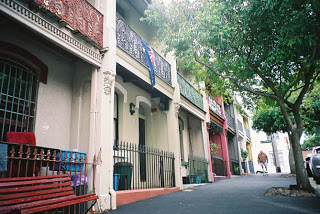 The Tipping Point is an actual, real place. I know this because I am there. On the pointy end of it. It’s been nearly six months since I started this blog (where has the time gone? Oh, that’s right, sucked into Blog Land) and in that time I’ve received a couple of Awards and some ‘tags’ or memes – both of which kind of confused me.

So I did what I always do when confused, which was to ignore the situation in the hopes that no-one would notice. I figured I’d just keep on doing my thing on my blog, sending it out into The Great Wherever (TGW) and that would be that.

But the thing with blogging – the great thing about blogging – is that it’s not just about sending your thoughts into TGW because – and this comes as a surprise to a newbie – TGW writes back! What with all the popping into other people’s blogs that you do, and all the popping into yours that others do, you become, well, neighbours. And neighbours interact. Just like in the good old days when one, gasp, actually spoke to the people next door, so it is with blogs.

So I can’t be confused and ignoring people any more. They’ll think I’m snobby and stop asking me to barbecues. Victoria at Hibiscus Bloem asked me very politely to answer some questions, so I am.

Autumn. The colours suit me, the temperature suits me. The skies are brilliant blue, the sun shines and there are leaves to kick around. What’s not to love?

Best holiday you’ve ever had?

I spent two years travelling overseas in my twenties. It wasn’t all fun and games as I had a job based in London but… actually, no, it was all fun and games. But, you know, as far as I’m concerned there’s no such thing as a bad holiday.

Would you ever consider any form of cosmetic surgery?

I used to joke that I’d get a boob job and tummy tuck when I turned 40, but I don’t know a single mum who’s never had that thought. In reality, no.

Not really. I keep getting those emails asking me to participate in recipe exchanges and, I confess, I keep breaking the chain (I know, my future is looking shaky right now). I’m the most disorganised recipe junkie the world has ever known. I have favourite recipes, it’s true – but I can never find them when I want them.

If you won a million dollars, what would you do?

Jump around, pay the mortgage, buy the 1970s train wreck of a house at the beach that I saw on the weekend.

So that’s that. Do you feel you know me better now? Will you lend me a cup of sugar – or even the recipe when I can’t find it?

In response to the Awesome Blogger Award from the lovely Annie at Living Life As Me and The Versatile Blogger Award from Tia at T.L Brink, I’m going to combine both – without the buttons because I have an aversion to HTML – and just provide a list of blogs that I love and never miss. Most of which are on my blog roll already, but, you know, just in case you don’t like to leave via the side door when you visit here, I’ll put them front and centre.

Deer Baby – she writes like a dream and is called Alison.

My Fluffy Bunnies – beautiful writing, even manages haikus every Friday.

MaxabellaLoves – Sister B in all her awe-inspiring glory.

And Then There Were Four – Sister C is funny, pragmatic and wonderful.

Not Drowning, Mothering – makes me snort coffee out my nose.

Ah, The Possibilities – The Pioneer Woman follows her on Twitter. Enough said.

In My House – more than just pretty pictures, Catherine knows her interiors.

Should any of these people care to keep the Question Chain Letter going (and, don’t worry, there will be no threats of misadventure if you don’t), these are my five questions:

Did you have a Birth Plan? How did that work out for you?

Did you, at any stage, attempt Gina Ford’s Contented Baby regimen?

What is your favourite form of exercise?

What was the best first date you ever went on?