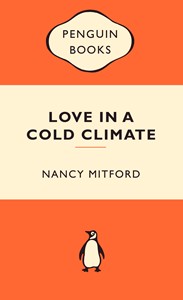 My quest to get a few classics under my belt in 2010 continues unabated. The latest orange-and-white cover to be cracked was Love in a Cold Climate by Nancy Mitford. I had strong responses to this book. To start with, it was all Cold. By the end, it was Love.

I confess that I began the book back in April. Read two chapters. Stopped. Devoured three crime thrillers – one good, two unsatisfying. I only came back to LIACC because there was nothing else. I’d even read a biography about Kurt Cobain – complete with downward heroin spiral, slightly mad lyrics and a sheen of dirt – before I could bring myself to revisit Nancy.

I’m glad I persisted. Hers is the kind of voice that grows on you. The archness, the wit, the cold, clinical skewering of the world around her. What seems like a capering, lightweight dance of a story reveals itself as a carefully constructed cotillion.

I confess that I love the idea of the Mitfords. I read The Mitford Girls by Mary S. Lovell (2001) years ago and was captivated by the entire clan (listed here in no particular order)– Diana the fascist, Decca (Jessica) the Communist, Unity the Nazi, Debo the duchess, Nancy the novelist and Pam, the rural Mitford. There was also a son, Tom, who died in Burma, but he didn’t really do it for me in quite the way ‘the gels’ did.

There is much of the Mitfords in Nancy’s book. Enough to suggest that my next foray into Mitford world should be her first book The Pursuit of Love (I know, I’m all back to front) followed, perhaps, by Jessica’s Hons and Rebels.

I’m not sure what it is about this minor aristocratic family that fascinates me so much. Perhaps the fact that there were so many of them that they were able to have a family member involved in many of the major movements of the early 20th century. The sheer volume of women? The mischievous sense of humour that seems to be genetic? The inherent charm they seem to have had in spades?

Whatever it was, it’s there in Mitford’s book, and makes it immensely readable. It didn’t feel ‘hard work’ enough to be a classic – more like smart, savvy chick lit from a previous generation. She’d have been one hell of a grandmother.