There’s a bear in there… somewhere. 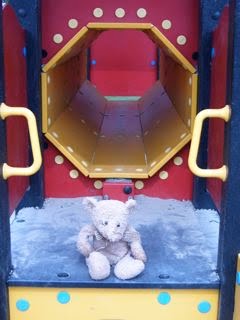 My friend F is suffering tonight. Her son has lost his teddy. Cue tears, tantrums and complete lack of sleep. I understand the horror. I’ve been through it. To understand the trauma, however, it’s important to understand Mr6’s relationship with Bronte Bear.

Mr3 has Alla Hoo Hoo, the imaginary mother of 98 who fights fires, goes to high school, drives trucks, and has done all the things that Mr3 badly wants to be big enough to do. All while wearing high heels (or ‘big shoes’ as he calls them).

A few years ago (when Mr6 was three years old), I wrote a story for Sunday magazine in the Sunday Telegraph about Bronte’s trip to the Sydney Doll Hospital to have reconstructive surgery on her face (the pic, left, is her in Belgium, pre-surgery). This is how I described her:

“Bronte Bear has been a fixture in my son’s life since birth. Over three years, the relationship has developed into a full-blown love affair. The obsessive kind that poets write sonnets about. He goes nowhere without her, can’t sleep without her and worries if he thinks she is too cold/hot/tired/bored. (You haven’t lived until you’ve been informed that you need to come up with a new plan for the day because a teddy doesn’t find the current activity exciting.)

Bronte is a bear with personality plus. She has her own voice (a squeakier, infinitely more irritating version of his), her own favourite colour (pink), her own special seat in the pram at his feet, even her own passport. Yes, passport. Made by a loving – some might say insane – mother to help her son prepare for an overseas holiday, and stamped by bemused passport-control people around the world.”

Bronte’s hospital visit cost me six weeks of sleep and $200. For a bear that initially cost around $14. For a bear that was exactly the same as two other bears in his collection except for one thing – they weren’t Bronte. (They became known as Bronte Bear’s Sisters and Mr3 now occasionally takes one to bed. Loose, that Bear family.)

Some months after Bronte returned from hospital, she went missing. We had been out strolling around the bike path near our home in the Big Smoke and she’d fallen from the pram. A fact that remained unnoticed until two hours later when it was time for bed. It was summer, but the light was fading fast as The Builder hopped on his trusty, rusty old bike, complete with rapidly flattening tyres, and embarked upon a rescue mission. Faced with screaming pre-schooler and a sleepless night ahead, I could do nothing but pray.

He came back empty-handed. Four hours later, the tear-stained, sodden scrap of misery that was Mr6 (then three – must keep reminding you of this, in case you think he’s, um, immature) finally fell asleep and The Builder and I set about hatching a plan. First, we prepared a ‘Have you seen This Bear?” poster, full-colour, bright red headline, appealing Bronte picture and all. Then, we planned the route upon which we would distribute our posters, working through his collection of gaffer tapes to work out which would have the best hold.

Early the next morning, Mr3 (then a newborn) and I dropped a still-wailing pre-schooler off and set off on our mission. I followed our loop of the previous evening, dotting posters on every available space, eyes glued to the ground for a glimpse of manky brown fur. Nothing. As we got closer and closer to home, my despair grew, my gaze never leaving the path and its environs for a second. Surely she couldn’t have gone too far from the path?

It was sheer coincidence that, passing the park shaped like a pirate ship, I happened to look up. I’m still not sure what caught my eye – a bird? a plane overhead (highly likely in our inner-west location)? Superman? Whatever it was, I still thank my lucky stars for it. For there she was, dangling from a branch.

And it was then that I remembered one of the main Commandments of parenting in the inner city – if you find something on the ground – a hat, a shirt, a bear – thou shalt put it on a fence post or gate, out of the way of marauding pets and humans, and at eye-height for a harried mum to spot on her way home.

Someone – another mum, I’d like to bet – had hung Bronte high, out of the way of passing traffic. You only had to look at her to know she was a much-loved bear, and someone had recognised that fact. I was so excited I rang The Builder on the spot, high on excitement. “I found her! I found her!”

His relief was palpable. Then he suggested I retrace my steps back around the path, taking down all the posters so that we didn’t get any ‘weird’ phone calls. It was a busy morning.

So Bronte is still with us. He sleeps with her each night, dresses her up as a Jedi knight when the mood takes him, and still holds long-and-involved conversations with her. Unfortunately, her voice is not getting any less irritating as she ages.

Admittedly the relationship is not as intense as it once was. These days they’re more like a married couple, reading each other’s minds, relaxed in each other’s company, happy to lie on the sofa and watch television.

I confess I’m relieved. I hope that she will one day be a faithful memory of his childhood, tucked on a shelf, becoming less and less relevant. He’s growing up and away from her. That’s healthy.

But I’ll never be able to let her go. Even after he leaves home, there’ll be room here for Bronte. To me, she is a symbol of his childhood and I want to keep her with me forever. Just as long as she’s quiet.