Staying inside The Wire 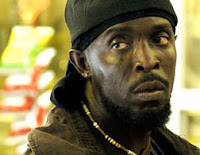 It’s rare for me to become obsessed by a television show. Mostly because I work at night so I don’t watch a lot of television. I had a brief flirtation with Survivor (I know!) last season because I was fascinated by the machinations of Evil Russell, and I became hooked on the last MasterChef as well, drawn in by that impossible croquembouche and then unable to leave.

It usually takes a while to get me in. I’ve tried this season of MasterChef but there are simply too many names and faces to care about any of them. I’ll wait til they’re down to a manageable eight or so.

With Grey’s Anatomy, I managed a few episodes before Meredith’s whining drove me screaming from the room. Not even McDreamy was enough to keep me there. Ditto on Desperate Housewives after one season. They drove me nuts.

But all that’s over now. I have found TV nirvana. In fact, I just spent a considerable part of my evening online searching for series four on DVD. Series four. We haven’t even finished series three yet. Now is that commitment or what?

But HBO’s The Wire deserves commitment. I know I’m late to this, but…I was busy. Then I watched the first episode (on DVD) and was hooked, even though I could have done with subtitles for the street slang, and found all the low, rumbly male voices a bit hard to hear. My ear is now tuned. I’ve got the street talk down pat, the names straight and the storyline ensconced in my head. The Builder and I have ‘dates’ on the couch, rationing our allowance of episodes per week to two or three, just to make it last.

Part of me wants to send the kids to my parents for the weekend and watch all five series back to back in a marathon session. But then it will be over. They only made five series. I’m dreading getting to the end. So I’m happy to ration.

I seriously haven’t been this excited by television since I watched The Kids from 47A with my sisters in our house in Alice Springs in the 1970s. We only got the ABC, so there was nothing else to watch. But we loved it anyway, bouncing up and down in excitement when we heard the opening bars of the theme song.

These days, I only bounce on the inside, but I have that same sense of anticipation with The Wire. It’s smart, satisfying television, with amazing scripts and actors who look like actual people, not ‘actors’.

It will be a sad day in the Fibro when we get to the end. You feel me?