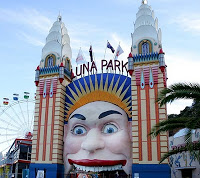 How was your Mothers’ Day? I’m in a reflective mood about mine, mostly because it didn’t quite go as I’d imagined. Then I realised that I shouldn’t expect anything else. Motherhood never quite goes as you’d imagine.

It started well. We woke too early, in a strange place, after listening to screaming and yelling for much of the night. So far, so labour. It was hugs and kisses all round, we got dressed, and headed down for breakfast. Or would have done, had Misters 6 and 3 not decided to have a fight over who was going to push the buttons in the lift. Cue: tantrums all round. Toddler stage, anyone?

The following six hours were Hallmark. We had stayed in a hotel in The Big Smoke (hence strange place, yelling was revellers out on the street doing what I used to do pre-children), and spent the morning wandering around the markets before hopping a ferry and heading to Luna Park. It was exactly like that six months between the ages of three and four when children are so delicious you can’t imagine why didn’t have seven of them.

After sliding down some large slides, eating fairy floss (which Mr6 handed back because it was too ‘sugary’) and wondering how in the world they came up with their ridiculous pricing structure, we left Luna Park and walked back over the Harbour Bridge. The sun was shining, the seagulls were squawking, the kids were excited. It was a good-to-be-alive moment – much like the first day of Big School.

It wasn’t until we got home, admittedly after a long drive, that things went pear-shaped. Everyone was tired. Including me. (You see, how I’m setting up my excuse here.) So when Mr6 began on a litany of refusal and obstruction, I got to the point where I actually had to follow through on my usual threat to send him to bed without dinner.

I’m sure you’ve been there. I tried threats and warnings. I tried taking away things he loved – Famous Five reading sessions, for one. No go. It got to the point where I had to make good on my threat or forever have to deal with a child who said ‘go on then’ to every disciplinary measure I tried.

He was outraged. Angry, sweaty, tear-stained.

I was much the same. But add disappointed to the list. At myself, for not finding a way to manage the whole mess better. At him for not toeing the Hallmark line and being a cherub on Mum’s Special Day. I didn’t even get to open my presents.

But that’s the thing about mothering, isn’t it? It never quite goes to plan and you have to find a way to make it work. I did my job tonight. I set a boundary and I made it firm.

Tomorrow I’ll do my job again. By smiling sweetly and forgetting the whole thing ever happened. Because I was in at school on Thursday and had a sneak preview of my Mothers’ Day gift. A picture of me, drawn with a smile to equal the Luna Park face. Which is pretty much how I feel about being his mum.

In the meantime, I’d like to thank my mother from the bottom of my heart for the boundaries she set and the disappointments she’s forgiven. It was a lesson in mothering I haven’t forgotten and will do my best to emulate. Even if things don’t always go to plan.