When you can’t see the forest for the weeds… 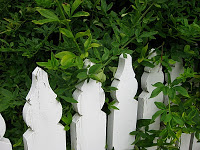 In my time, I’ve written quite a few garden features. Enough so that I can tell a gardenia from a geranium, a bromeliad from a begonia, a weed from a … well, you get the idea. I’m even winning my ongoing battle with the compost bin, having nurtured a struggling camellia with a good dose of rotten stuff today. Lots of smelly goodness that should see it right.

All I’m saying is that my thumb is a little bit green.

In the Big Smoke, The Builder and I created a garden from scratch. Not a courtyard with water feature, a bit of paving and a potted Agave, but an honest-to-goodness garden. Not a big garden, for sure, but a garden nonetheless. It took years. We knew the names of all our plants, and agonised over the survival of each and every one. To the point where we still drive past our old house on visits, just to see how the Magnolia is doing (nicely, thanks for asking).

Our Fibrotown garden is a whole new ballgame. It’s twice the size and about 27 times more established. Many years ago, somebody planned it all out so that there is something flowering in one corner or another all year round.

We have two huge Murrayas – one at the front, one at the back – that fill the Fibro with heavy perfume on summer evenings, no matter which way the wind is blowing. We have the most enormous, deepest, reddest roses that bloom through summer – and are obviously confused by current warm weather patterns because they’ve just coughed up another flush of colour. We have camellias for winter, banksia roses for spring, salvias for autumn.

We also have some serious territory to weed. During an interview with Sydney landscape designer Peter Fudge – one of my great, go-to guys for garden advice and information back in my House & Garden days – he told me the one piece of advice he always gives beginner gardeners: weed little, weed often. He doesn’t walk down his front path without looking for invaders and eliminating them.

I thought about this today as I worked my way around half of our front garden. It took me two hours. It will take a trailer to remove the green waste I removed from our garden beds. It left me with an aching back, groaning hamstrings and ingrained dirt in my knees. And I still have the other half, plus the backyard, to do.

Clearly I have not been weeding often. Once every two months or so is not often enough. So now I have to weed a lot.

If I was clever, I would patrol the grounds each day, keeping an eye on my cleared patches and ripping out new weedy growth the moment green shoots appear.

But I probably won’t. Instead, I’ll stop to admire the burgeoning buds on my camellia. Or check to see if the photinia is unfurling new red growth. I’ll ignore the ugly undergrowth and focus on the beauty right in front of me.

What would life be if all we saw were the weeds?