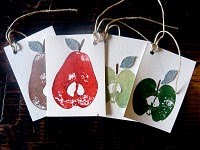 In my next life, I will be a crafty person. I will sew a fine seam, knit a fine purl, throw a fine pot. I have so much admiration for people who ‘make stuff’, mostly because I was at the back of the line when they were handing out whatever skills are required for doing it.

I’m thinking patience, for one. Precision, for another. Basic hand-eye coordination, perhaps?

It’s not genetic. My sister B (we’re A, B and C – just like Monica McInerney’s Alphabet Sisters, only we were first) is very creative, sewing cushion covers, whipping up bunting and hemming trousers (my standards aren’t high). My cousin K even quilts, for Heaven’s sake! It’s not widespread within the family, but it is present. Which makes my efforts even more pathetic.

I took Mr6 to a Steiner playgroup when he was two. It was all very nice. We baked bread, played in the sandpit, sang songs, ate fruit, and played with plain wooden blocks and dolls with no faces. He was nonplussed about the dolls, but loved the story time and the fact that we got to sing Twinkle, Twinkle every week.

At my first visit, while the children enjoyed some ‘free play’ and I settled in for what I thought would be a cup of tea and a chat, I was handed some knitting needles. The Steiner way is that everyone should be busy, to set a good example. I was, I was informed by a friendly girl in a woolly hat, going to knit a wombat.

And so for ten weeks, I knitted, in brown wool, a faceless wombat. Not large. Not particularly complicated by wombat standards, but I struggled over it, swore over it, possibly even shed a tear or two. When I finished, I cheered. Then I handed it to Mr6 (then two), who took one look at it and told me he thought it would look better with some of those ‘googly’ eyes stuck on it.

The Builder suggested that as a wombat it made a good pig. I still have that wombat. I even brought it with me in the move to the country. I simply can’t bear to throw it out.

But I’ve decided to stick to what I know. So I write about crafty people. In the new issue of Australia Today (Australia Post’s magazine, out today), I’ve written a story about people who are taking old-fashioned skills and making a living from them. Because, guess what, craft is cool and handmade is hot.

For the story, I interviewed Sally Morrigan from georgielove.com and discovered a kindred spirit. On her blog, she describes herself as obsessed by craft, and yet “blessed with her father’s sausage-like fingers”. She abandoned her own crafty ambitions after one too many accidents with children’s scissors and Clag, and instead created a fantastic online shop to take beautiful Aussie crafts to the world.

Fortunately for me, I have sources closer to home as well. My friend K makes the cute hand-printed gift-tags pictured here, saving me the hassle of making my own.

At the end of the day, I think it’s important that there are people who can and people who can’t when it comes to craft. They like to create, we like to acquire. It’s a win/win situation.